Laura’s tribute to our much missed Ash plus more pictures below.
Ashbless, my gray girl

Ashbless was the last of our kitty quartet. We had had all four since 2003 or so. When we got her she was a tiny gray cat, and she came home in the same carrier as Nutmeg. Ash never liked to be held, but over her years with us she learned to live with it. She was our writher, flopping down next to a person and rolling about in abandon. Couches were her places. Downstairs she had her preferred couch, but any person on any couch MUST be sitting there to pet her. Upstairs she had her place between Kelly and me on the TV couch. She could get pets from both of us there. Sitting on people wasn’t her thing; she always preferred to be next to someone.

Ashbless was the lowest cat in rank, beaten up by everyone else. Whenever a rare cat fight broke out, she ran TOWARDS the altercation, because this was her only chance to get in a few hits. She’d swat someone a few times then run away. We built her a little shelf so she could eat up away from the other cats. If there was anyone near, she would insist on getting pets before eating—a sort of petting jump-start. Each morning she would stand on the ledge next to me as I brushed my teeth, asking for pets before eating.

Her face was beautiful, hinting at Russian Blue heritage. Her ears were enormous; I called them her big bat ears. She had prominent fangs until she strangely ejected them—some cats do this though why is a mystery. Until she lost her fangs, she was our best hunter. Bats, mice, moths. One time a bat was flying around in circles in the media room and the other cats were popping up and down like popcorn trying to get it. She simply climbed the cat tower, watched as the bat circled twice, leaped, grabbed it, broke its neck, landed. Then she gave the other cats a look as though to say “you guys are an embarrassment!”

My gray girl had resting anxious face. She always looked nervous, even when writhing in happiness. She had pink jellybean toes and a little pink spot on her gray nose. She loved belly rubs and after not too much petting she would get over-stimulated and start writhing even more, sometimes with a poofy tail. Her sleeping positions were adorable, either curled into a ball or with some legs straight out as if diving. Most of our pictures of her show her on her side on a couch.

Her last twelve hours were very hard. About 9 pm we realized we hadn’t seen her in a while. We searched the house thoroughly, finally locating her in the far corner under the guest bed. I called to her, and she stumbled towards me. When she came out from the bed, she could barely walk or hold herself up. She also could no longer see. An after-hours vet visit meant she got some steroids, which can sometimes help in the case of a stroke.

We brought her home to see how the steroids would do, but she was very upset. If we weren’t touching her, she would freak out and try to run. She ran into a few doors and walls before we figured out we had to keep touching her. So I spent the night on a few cushions, with her curled up in a warm down blanket next to me. Kelly piled pillows against every corner or hard edge in the room. I kept one or the other hand on her all night. When she tried to move, I would either restrain her or help her stand. But she would always fall over again. She ate a little come morning, and drank a little. But there was no real improvement and it was time to let her go. 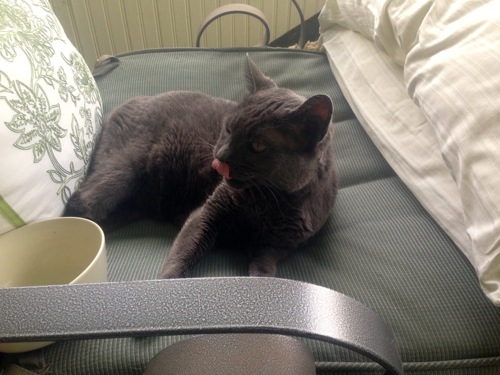 I love this shot of Ash and Isabelle sharing the cat chair. 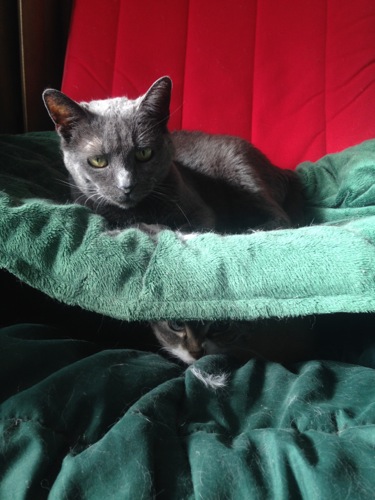 Is MY sock, MINE! 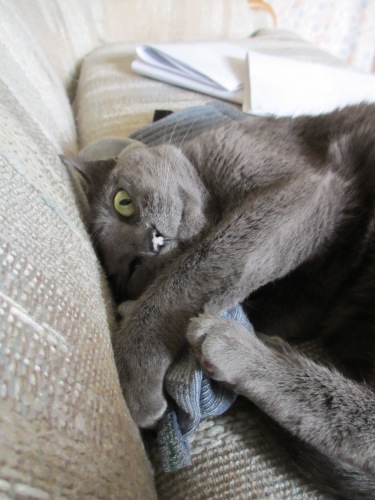 I think I tied my legs in a knot, a little help here? 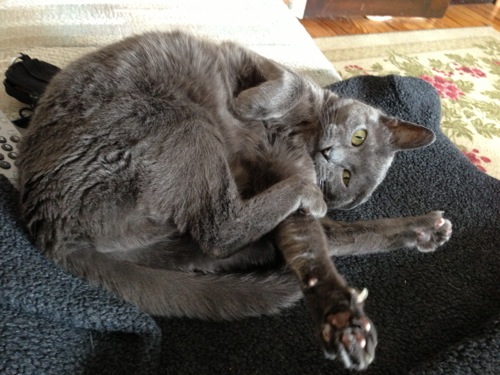 The kind of concentration only a chipmunk can generate. 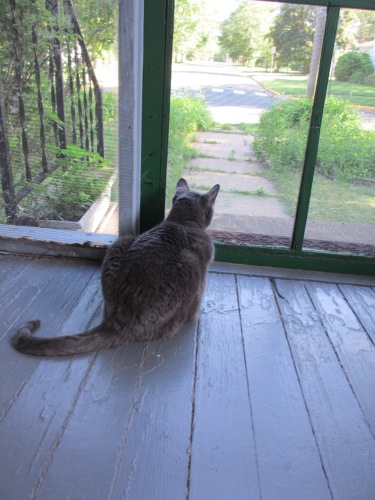 This is such a perfect cat’s cat shot. All poise and dignity. 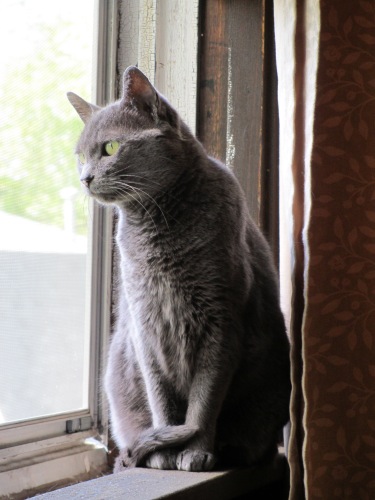 Not that she couldn’t be undignified. 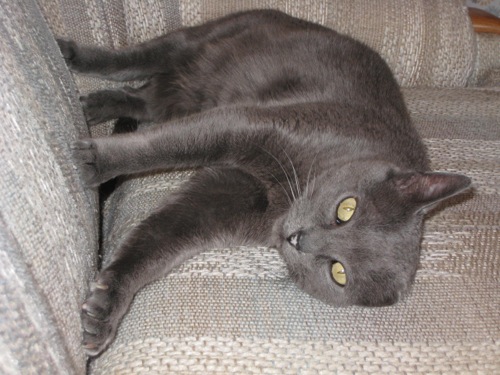 I put a spell on you, and now you’re mine. 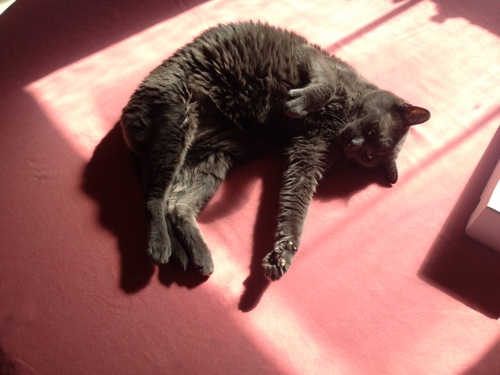 On her favorite chair on the porch with all the pink jellybean toes. On her couch looking perfectly poised in front of her kitty quilt. 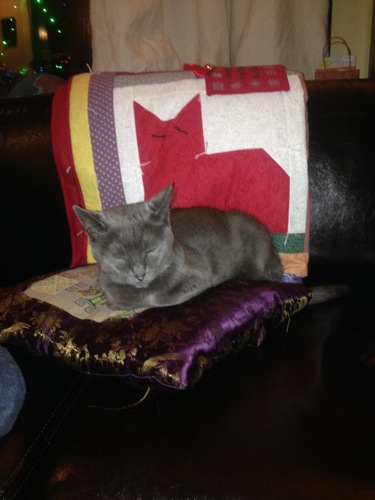 As the only one of our cats spry enough to there quickly she he loved the
counter and the opportunities it brough to spend time with her people. 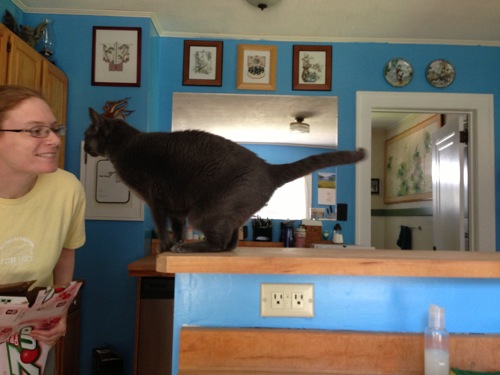 She delighted in eating cobwebs even if they did muss her whiskers. She never did learn to operate the remote. 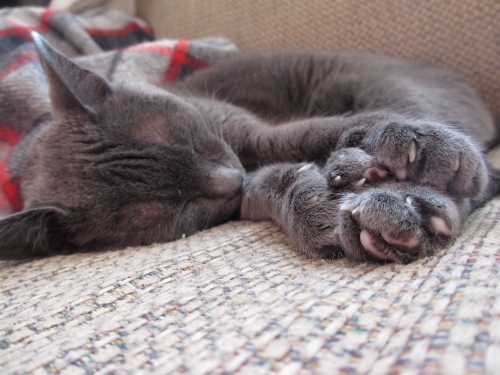 I love the way the sun lights her eyes here. She was so beatiful. 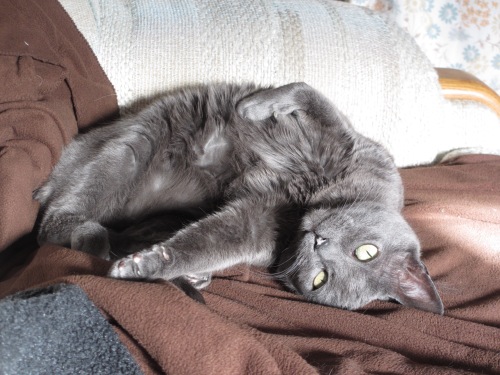 Here she is with Laura’s glasses and a bit of resting anxious face. More anxious face, though I don’t have a picture of her at her most concerned. 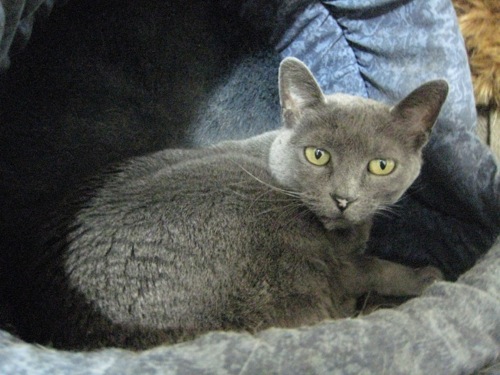 She loved the spot on the media room couch lying between us. She was highly tolerant of the occasional visitor. She never really got the hang of the cat pod, though it matched her fur. 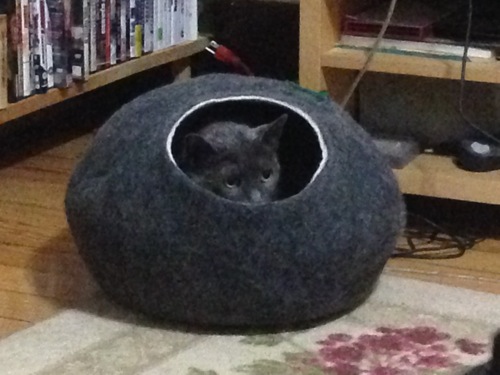 Here she is claiming an extension cord for her very own. 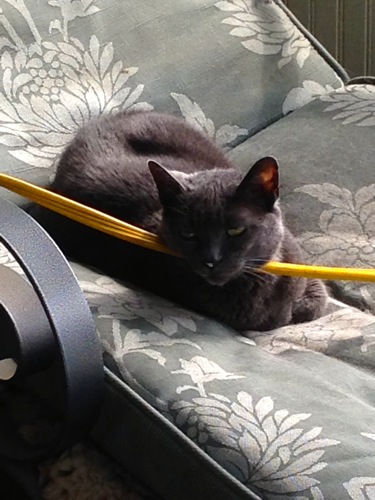 And again on the couch between us. In her last months she came to love the heated cat bed. 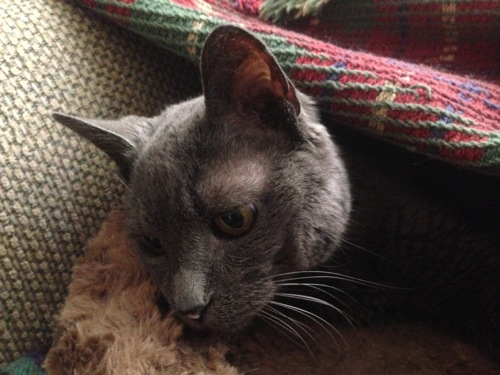 This is the face of cat who totally didn’t lick that powdered doughnut. 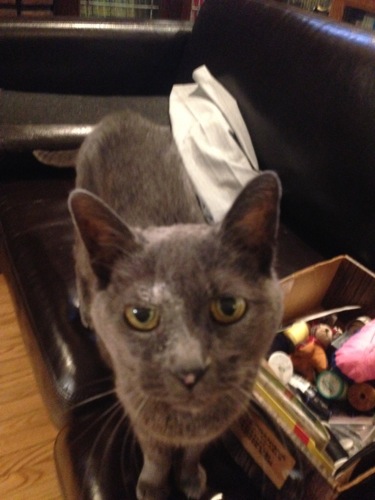 And I’ll end with Ash and  her favorite person in the whole world.