I got home from my Guest of Honor appearance at ConClave 38 late last night and then went down hard for about 12 hours. I’ve now had a good long soak in the hot tub and some time to process a really fantastic con experience. So, here are my recollections in no particular order.

First, I had a great time, and I’d like to thank the whole ConCom for taking such good care of me. The whole process for this convention was super smooth for me, from the invite, through handing them off to my travel agent to make the plane arrangements, getting my schedule sorted, my pick up at the airport, the con itself, and my return to the airport and flight home. This is me in the official (not really) GoH wall niche, on Friday. 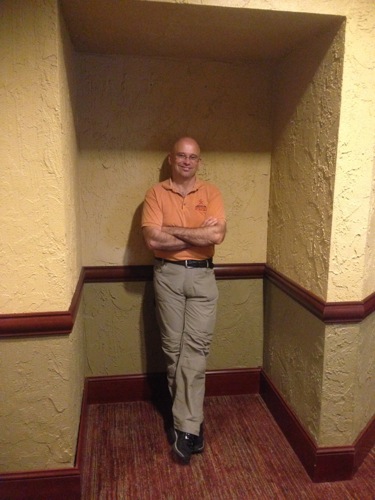 I had a total of nine programming items. That included a laid back meet and greet with hot beverages provided by the con and time to sit down and really chat with fans, which was lovely, and a reading + Q&A session where I read a bit of Drawn Blades and talked with folks about writing and the industry and my own work. My other seven items were part of the lit track panels and I got to have some great discussions about writing.

I’m not going to name all the folks I had fun with on programming, as I will inevitably forget someone, and I hate doing that, but should note here that I spent a lot of time paneling with M. Keaton who is an absolute delight as a panelist as well as the writer of an awful lot of published fiction. I also went to his children’s reading as several people told me I had to hear him read his short humorous story for children: Troll Snot. They were not wrong. It’s a fun story and the reading was a blast. I will note for the record that it’s criminal that no one has yet picked this story up for publication. It would go well in a magazine or antho focused on trolls or goblins, or as a stand alone illustrated children’s book. Someone, do something about that. There’s money to be made there, and I will cheerfully buy the first copy off the press.

Laura modeling the “I met Kelly McCullough at ConClave ribbons” they gave me to hand out. 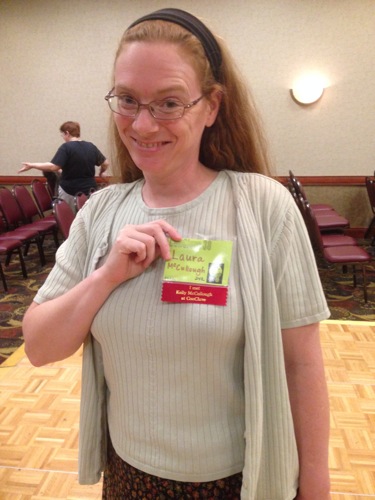 Another highlight included a round of me learning just how badly out of practice I am with knife throwing, on Saturday night with the Sal Sanfrantello and some of the other folks at Aegis Consulting, who teach various sorts of western European martial arts. They gave me a lovely set of Aegis throwing gears and a fresh resolve to dig my old throwing knives out of the toy box and set up a target somewhere. I was quite good at it once upon a time back in the ’80s and early ’90s. 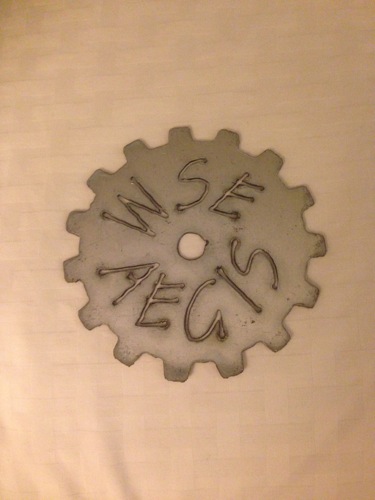 The program had one of my favorite pictures of me and Laura on it as the centerpiece—taken a couple of years ago by the marvelous Matt Kuchta—with the covers of my first ten novels flanking, which was cool and surreal. Hey, look, I’m on the cover of a con program! How the hell did that happen? Also, my first ten novels…I don’t even. I lead a rather surreal life these days. Basically, I’ve grown up to be pretty much exactly what nine year old me would have wanted me to grow up to be. Well, inasmuch as I’ve grown up. I am incredibly fortunate. Thanks to Jennifer Dye for the cover and for all the cool stuff on the interior including box quotes from a number of my books scattered throughout. 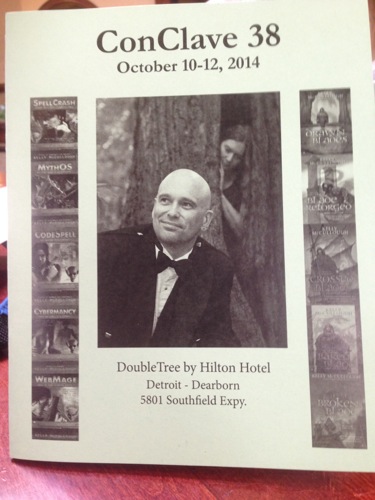 I got to indulge my inner magpie at Amber Fox Jewelry in the dealers room where I picked up two sets of stud earrings in amber and two in jet—I’ve four pierces on the left side. We also got a tiny and adorable knitted xmas cthulhu. I only briefly got to chat with Tom Barber who ran the dealers room and had all of my books ready to sign at the first available opportunity. 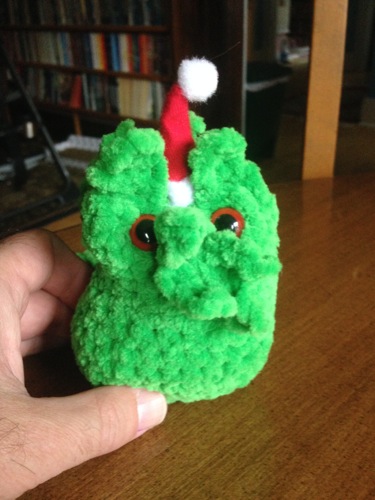 I met a bunch of enthusiastic fans and made a few new ones. That included a really lovely and ego boosting chat with some folks from the Dorsai Irregulars.

I didn’t get to see any of what the folks from the Intrigue Factory were doing, but it all looked like a lot of fun and I did get to do a group photo with them after not closing ceremonies. I would love to bump into them again at a con somewhere when I have a bit more time. Oh, and that’s Con Chair Jody Harrow there to my right in the teeshirt with the silver image on the front. 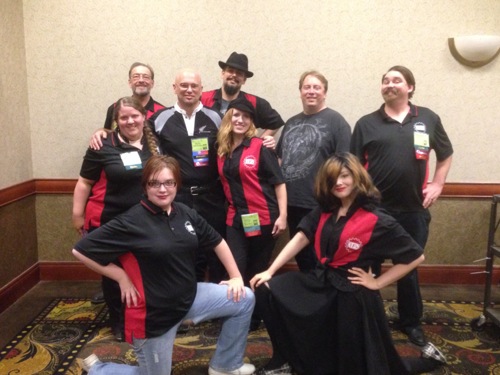 Sue Stahl, who ran programming, was great at getting me the programming I wanted and not overloading me. Thanks also to her and her husband who played chauffeur for us coming and going.

The few times I made into the con suite, Susan Harris and Patricia Altergott were wonderful hosts.

An enormous and entertaining man who goes by the name of Ox very politely kissed the top of my head—for luck I think.

I signed about a zillion books, a couple of badges, and at least one book plate.

There was a big shiny gift basket waiting for us in the room when we checked in. 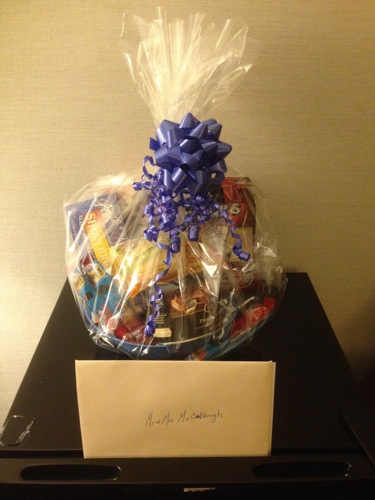 We missed the Regency dancing due to schedule conflicts and much to Laura’s dismay.

I got a shiny polychromatic GoH ribbon for my badge. 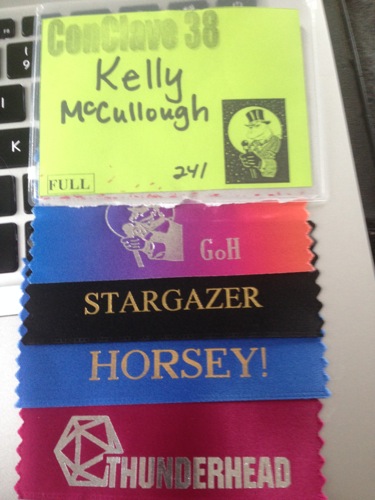 And a ConClave GoH mug that is now up on the shelf with my CONvergence GoH trophy—not the skull, that’s unrelated bric-a-brac. 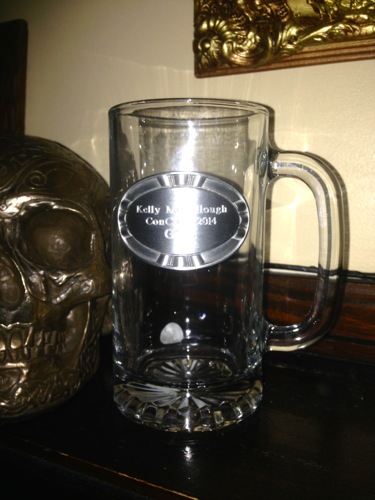 An incredibly sweet woman named Kimba (last name unknown) adopted Laura as a celiac buddy and kept her plied with all kinds of gluten free goodies while she was off grading and being a G0H con widow.

I’d like to give special thanks to Jody Harrow the con chair, who kept taking time out from the usual chair job of solving all of everybody’s problems to make extra sure that I was all right and that Laura was getting fed properly—always a concern with her celiac issues. On that front Jody arranged a special sit down with the hotel chef, Guillermo (I think—I’m terrible with names) who kept good track of us and had special cards made up for Laura to give the staff whenever she ate in the hotel restaurant.  I only got to chat with Jody a few times given our mutual schedules but I had fun when we did.

On the way home we stopped and took some video of the super fancy fountain in the Detroit airport. You can’t see it here, but the water projectors do a pulsed release thing that sent discrete packets of water moving around in an intricate pattern. 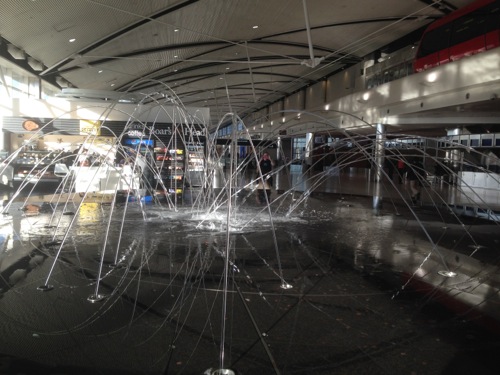 Also at the airport, we stopped at the Irish pub for dinner and drink. Jameson for me Strongbow for my lovely spouse. 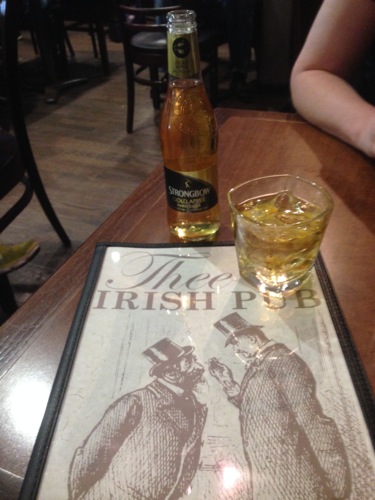 And I think that’s all I’ve got for now, but I reserve the right to add things later as they occur. I will inevitably have forgotten to thank someone I ought or note something really cool that I got to do, because I am terrible that way. My apologies if the cool or wonderful person I forgot was you.

First P.S. I forgot the tee-shirt… If you ever wanted a tee-shirt featuring me, this may be your one and only chance… 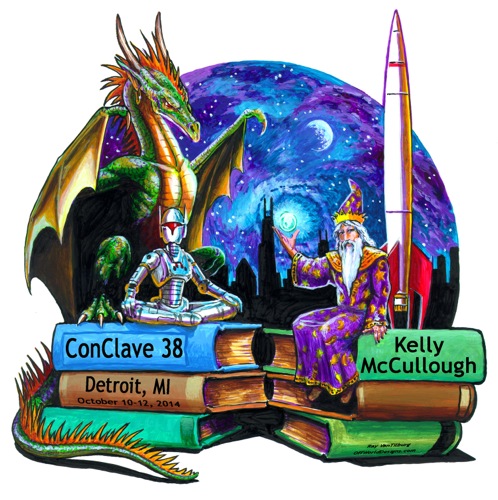