This is what my office looks like at the beginning of the beta draft process. In this case The Eye of Horus–Black School II. 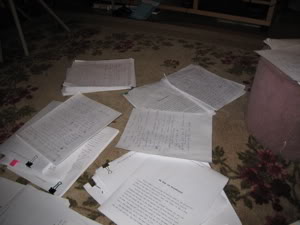 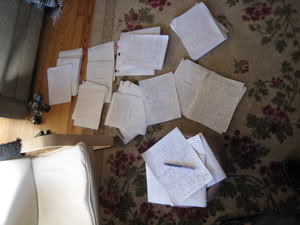 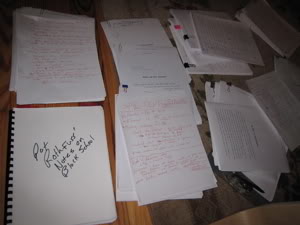 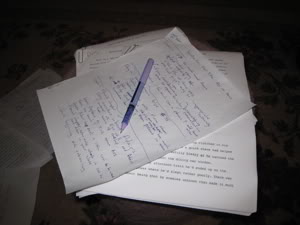 1) The Wyrdsmiths don’t always critique things in the exact same order due to various sorts of life interference.

2) Some of the critique comes in electronically for similar reasons.

3) By pure coincidence the Horus rough finished going through Wyrdsmiths in the same week that Pat Rothfuss read and commented on Black School (long story redacted) which is why the latter is part of the spread.

4) I just completely reread Black School and did some revisions there (Pat’s edits plus ret-cons from Eye of Horus) which is why I’m doing the Horus beta now rather than in a month or two which was the original plan.

5) While I know #4 is the smart way to do things under the circumstances, it means I have to put down SpellCrash for about a week in the middle of chapter 1*, which in turn means I’m going to be very hard pressed to get it done in the three months I’m shooting for, so I may be scarce for a little bit while I try to repair the hole in schedule.**

*Black School and WebMage are really incompatible in terms of voice and style and shifting between the two is a major gear strip that costs me a couple of days. This reduces the total time used by taking out two gear strips, but it does it at a bad place in the schedule.

**The schedule it dents is mine, not my publisher’s. According to Ace I have 6 and 1/2 months to finish the book. At this point I expect to use 3-4 of those.

(Originally published on the Wyrdsmiths blog November 21 2008, and original comments may be found there. Reposted and reedited as part of the reblogging project)